When several people are working on product development, branches help to manage different versions of the content. If you have a continuous project you can add project branches to Crowdin and allow translators to translate the texts right in parallel with development to avoid deployment delays.

Branch in Crowdin looks like a regular folder marked with a special icon and has specific behavior for duplicated strings.
The example of a files structure in the version control system (VCS) and Crowdin:

Note! First files you upload to Crowdin project must contain all the original strings and should be placed in the corresponding branch. For all article examples a branch with original texts is named Master.

There are few ways to add branches to Crowdin:

To create a branch via API, use the Add Directory method with is_branch=1 parameter:

There is no need to run a specific command to create version branches if the synchronization tool is used. The version branch would be created automatically while files uploading. Example of the source files/translations upload to the specified version branch:

Because branches are the different versions of the same product feature, the localization content in them is usually duplicated. To help translators translate versions consistently and avoid additional translation costs, we have a special option that allows hiding duplicated strings only between versions. When this option is chosen, only the original strings that were first uploaded to the system should be translated. All duplicated strings will automatically gain the translations from the original strings.

To make sure versions work smoothly for your Crowdin project, we recommend the following workflow:

The screenshot below visualizes how the workflow works in practice. All texts from Master, Branch 1 and Branch 2 are transferred to the translation server immediately after they appear, even though the branches are not merged to the Master branch yet.

Translations from all version branches are placed in one ZIP archive when they are downloaded through the web interface. Use the synchronization tool or API to download the translations for each branch individually.

The Master branch will contain new texts from the Feature branches as soon as they are merged. While synchronizing with Crowdin, all of the texts in the Master branch are populated with translations from the appropriate branch.

After synchronization of the updated Master branch with Crowdin, the Feature branch can be removed from Crowdin. All translations stored in the Master branch will remain. 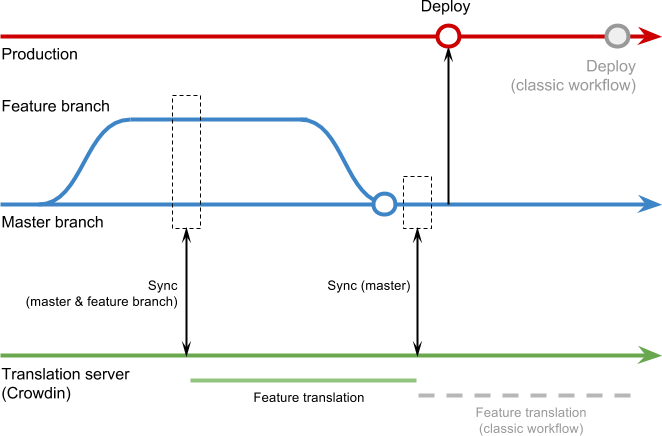 You can verify translations on production using only Feature branch before changes are merged with your Master branch. Such Test Deploy gives you an option of quick revert to the original Master branch version if needed. 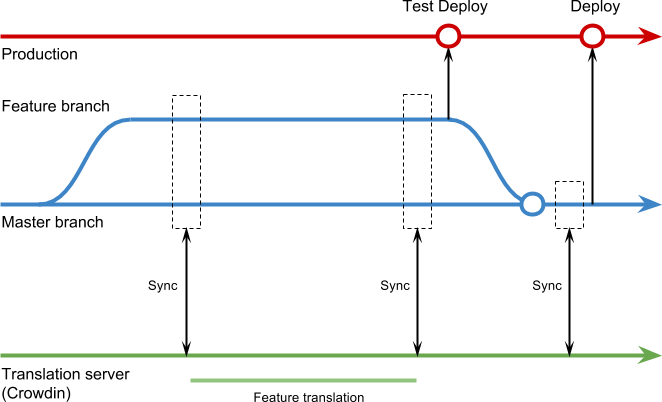